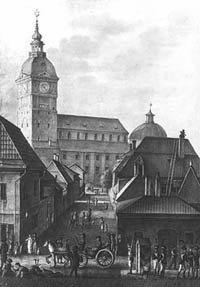 BioCity Turku – in an old campus

The researchers in BioCity Turku are proud of the opportunity to advance modern life sciences in the same campus area where the first academic scientists worked in Finland in the 17th and 18th centuries. Even in those times some Turku scientists were well known members of the global scientific community. For example Professor Pehr Kalm (1716-1779), a student of Carl Linné, made a four years long expedition to North America and became a friend with Benjamin Franklin. He wrote a book that contained one of first first-hand descriptions of the Niagara falls, and was subsequently translated into several languages.

The memory of other Turku scientists lives in the contemporary nomenclature. Gadolinium (Gd, element number 64) was named after Professor Johan Gadolin (1760-1852), making him one of only two scientists after whom a naturally occurring element has been named. A large genus of American plants, the Tillandsia (“Air Plants”) carries the name of Professor Elias Tillandz (1640-1693).

View the map of the present campus area